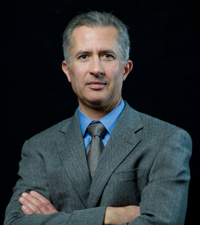 Mark A. Supiano, M.D. joined the University of Utah Center on Aging in October 2005 when he also became Chief of the Division of Geriatrics in the School of Medicine and Director of the VA Salt Lake City Geriatric Research, Education and Clinical Center.

The eventual outcome of his close bond with his grandfather became Dr. Supiano's career path in the new discipline of Geriatric Medicine. When Andrew Szupiany was born outside of Kiev, Ukraine in 1889, life expectancy for men was 45 years.  During the course of his 90 rich years of life he would emigrate to the United States to seek freedom from the czars, raise a family of four through the Great Depression, see two of his children graduate from college, witness two world wars (sending his two sons to battle in the latter), and endure living alone for the last third of his life as a widower.  Andrew's grandson Mark A. Supiano gained first-hand appreciation of the remarkable life his grandfather lived, and learned a healthy and successful approach to aging.

Mark A. Supiano, MD now leads the University of Utah Geriatrics program at a point in history when life expectancy is approaching 80 years, and the population above the age of 85 is the fastest growing segment of the U.S. population.  The demographic imperative of the aging population provided the additional motivation for Dr. Supiano to establish his career in Geriatric Medicine and be included in the first cohort of physicians who received certification in this new field in 1988.

Throughout his career, Dr. Supiano has responded to the demographic imperative of our aging population in his clinical practice of Geriatric Medicine, in a patient-oriented clinical research program, and in a commitment to medical education and research training.

His research program has focused on characterizing sympathetic nervous system function in aging humans. Recent clinical studies have focused on the regulation of sympathetic nervous system function in older humans with hypertension and heart failure, two extremely prevalent cardiovascular diseases in the elderly. Dr. Supiano has active roles within the American Geriatrics Society and is an Associate Editor for its Journal.

A special passion for medical education in geriatrics and research training in aging has been evident throughout Dr. Supiano's career. From 2001 to 2005 he led a program sponsored by the D.W. Reynolds Foundation that integrated geriatrics into the University of Michigan medical school curriculum. He also led the UM medical student program in aging research and directed its training grant funded by the National Institute on Aging.